This is how I proposed to my girlfriend!

I’ve been trying to write something for months now but kept delaying it for some unknown, to me, reason! So I decided to write about a project that I did back in 2015 which was a stop motion short film that I would then use to propose to my girlfriend!

But before moving on, let me give some background before explaining how I combined my engineering and artistic skills!

Not sure if this was genuinely my idea or if my girlfriend spend time whispering “you are now reaaaaady to propose to meeeeeee” in my ear during sleep but in any case I decided that it was time for me to do the next step after being together for 3 years.

I’ve always been a fan of stop motion films/animations. From Jan Svankmajer and Quay Brothers to Tim Burton and Wes Anderson, from a young age I was fascinated by the idea of giving life to figures. So it was clear to me that creating my own stop motion short film would be a very romantic and unique way to propose!

What I needed now was a set, a scenario, the appropriate music track and the actors!

Our first kiss took place in my favorite bar called Klouvi which is located in the heart of Athens, Greece in a neighborhood called Petralona! So I needed to recreate the bar which seemed duable and all I needed was some photos, some foam boards for the furniture and some miniatures to equip my fake bar!

While being an Erasmus student in Czech Republic back in 2005, I visited Prague where in one of my usual walks I found an awesome little toy store that had these 2 cute finger puppets, an old man and a old woman!

One thing that someone needs to know about me, is that I tend to buy stuff just because I think that will be used at some point in the future. And how correct was I after 10 years, I had my actors!

My future wife and myself, as an old couple going back to the place in which we had our first kiss! The scenario was almost ready!

Everything starts at a bar before it’s opening, we see a broom and a mop that are cleaning the floor, then chairs that start taking their place and glasses and cups are parading on the bar!

When everything is ready, our two protagonists enter the bar and sit on the same place that sat years ago. They order a wine, they kiss and something suddenly grabs their attention..

For the music track I decided to use a song called “Tin Can Parade” from a great Greek band called “Your Hand In Mine” for two reasons. Firstly because they share the same name with my favorite song from a post-rock band called “Explosions In The Sky” and secondly because they are one of my favorite Greek bands and I really pictured me and my wife holding hands for a lot of years when I heard that particular song!

Everything was ready for me to start building the bar and start shooting! 🎥

I started small by creating a couple of chairs to make sure that the scale is correct. Didn’t want to have to deal with any complaints from my protagonists, at least not from the beginning!

Not bad with just one try, right? So I decided to move on by creating some more chairs, tables and the bar related furniture.

As it didn’t make sense to create my own equipment , I decided to order some miniature glasses, water and wine bottles from Ebay and luckily also the scale was spot on!

Next I saw that the original Klouvi bar had an espresso machine but couldn’t find one that was at the same size, scale wise, with the rest of the furniture.. so I created my own!

The main bar was almost ready! 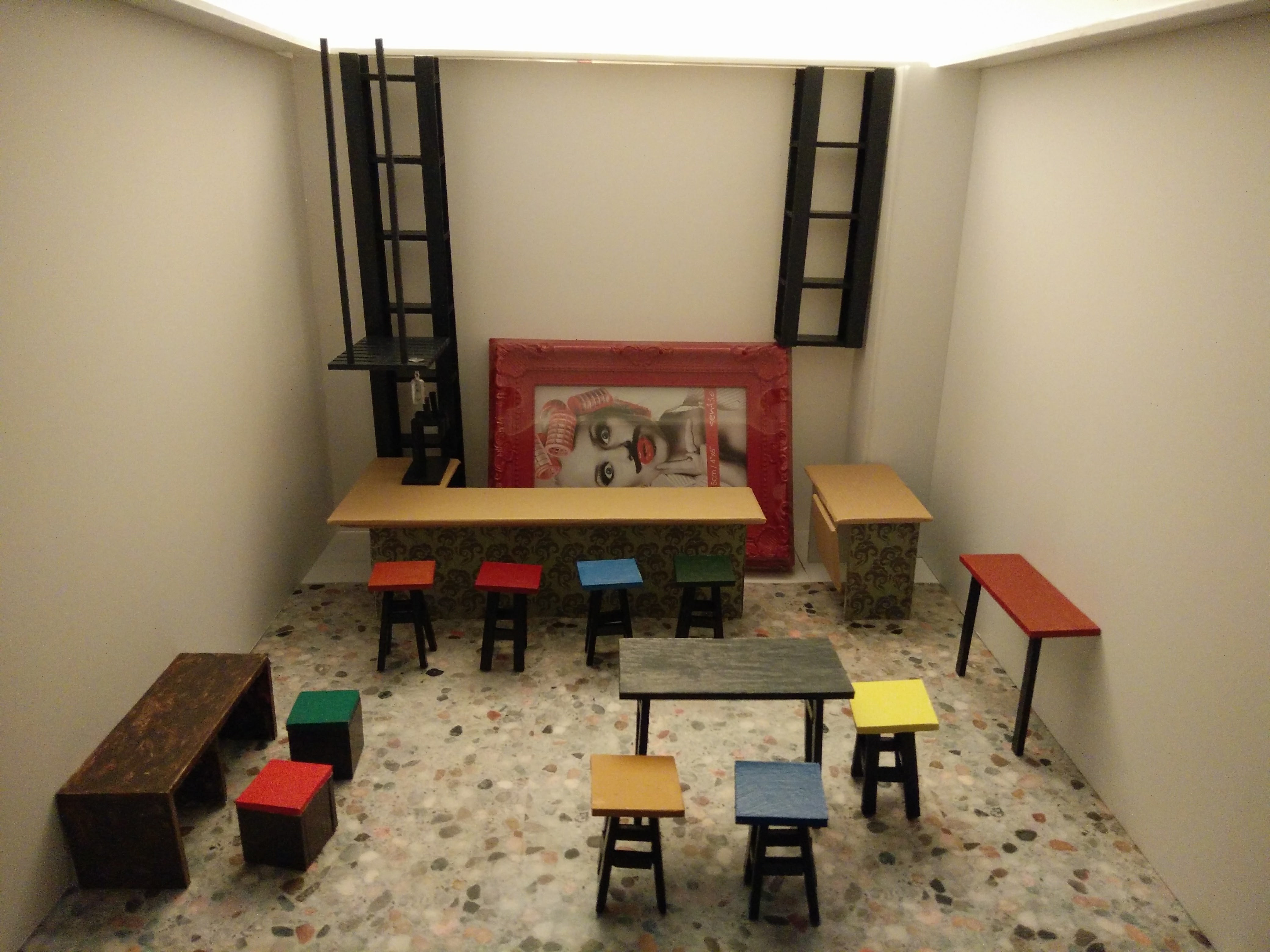 Then I started enriching it with the wine bottles and glasses that I had bought. I also added mops, grooms and a bucket with water needed for the first part of the scenario, the cleaning!

Some final touches with a Wine Cooler with ice cubs made from silicon and straws made from colored paperclips (I had to be creative as production was a bit low on cash 😂 ).

At this point I had what seemed to me like a full set which was pretty close to the actual bar! 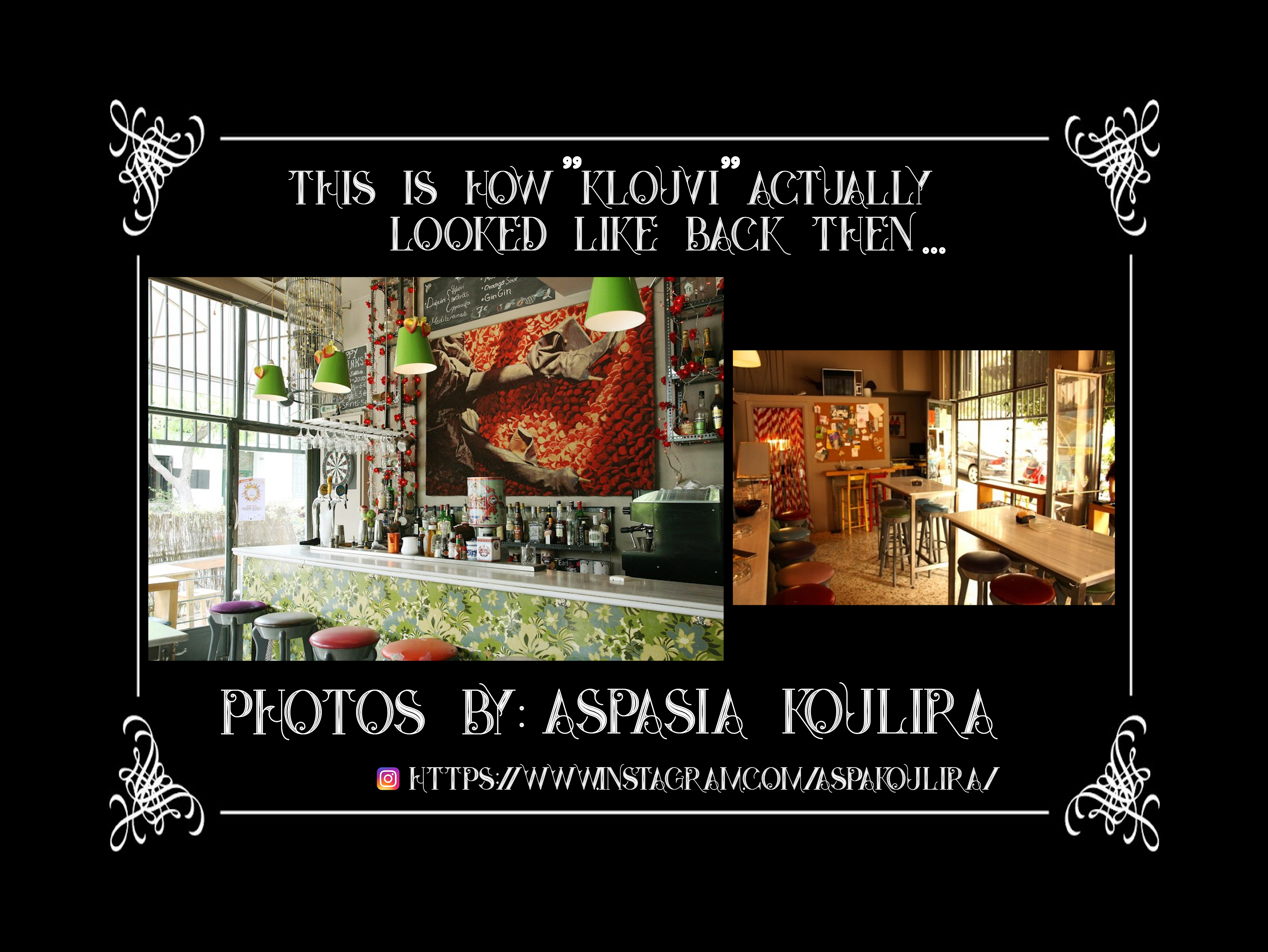 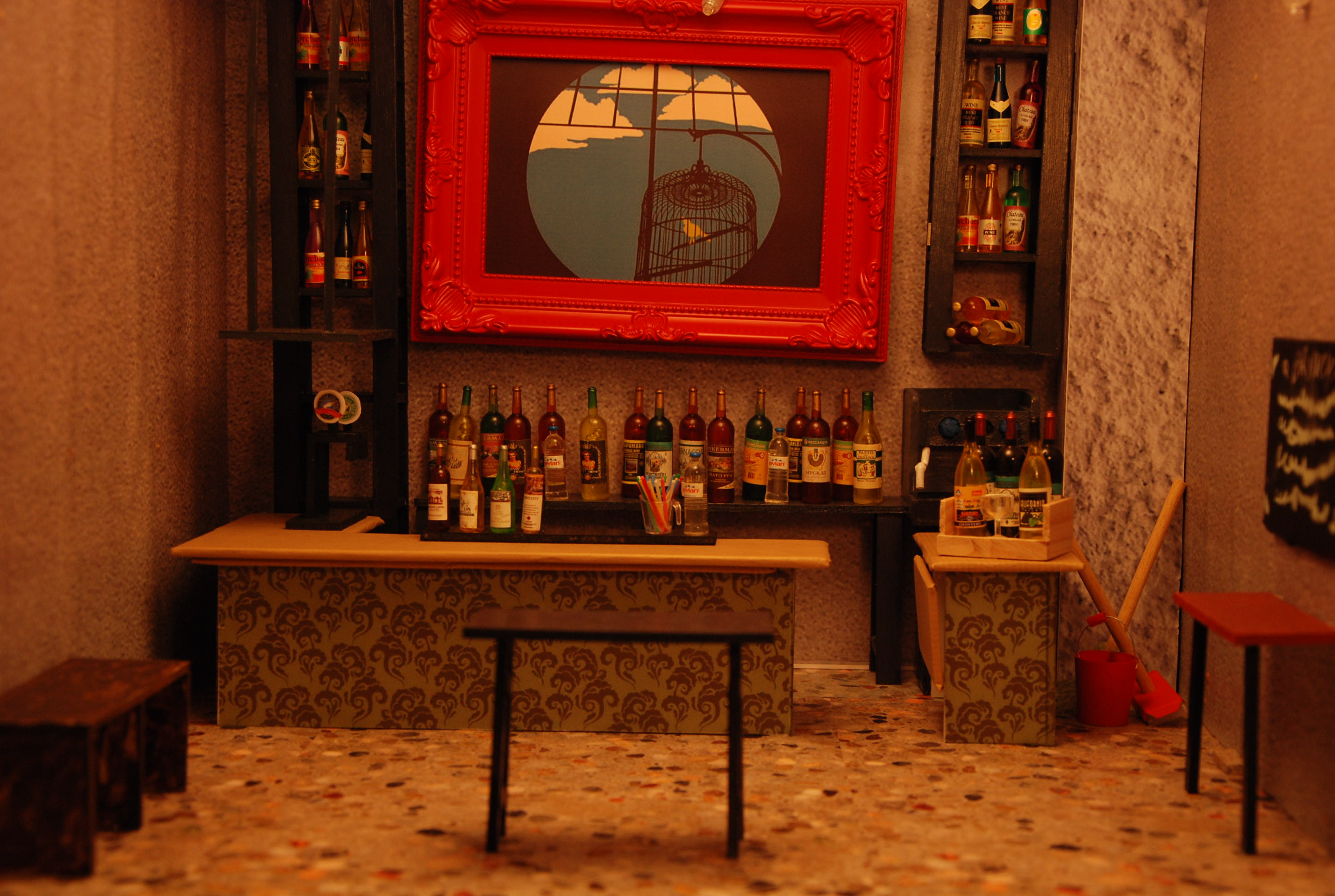 Everything was ready and shootings got the green light!

As many films, mine faced its own difficulties with the main one being the constant moving! I had to take the sets out of the closet each evening to take some pictures and then hide it again. I was leaving alone and my girlfriend would visit and of course she couldn’t see what I was preparing!

This meant that I had to recreate the scene, re arrange the bottles or glasses and sometimes fix broken furniture! The positive thing was that I at least had the time and space to finish this project as we weren’t still leaving together. 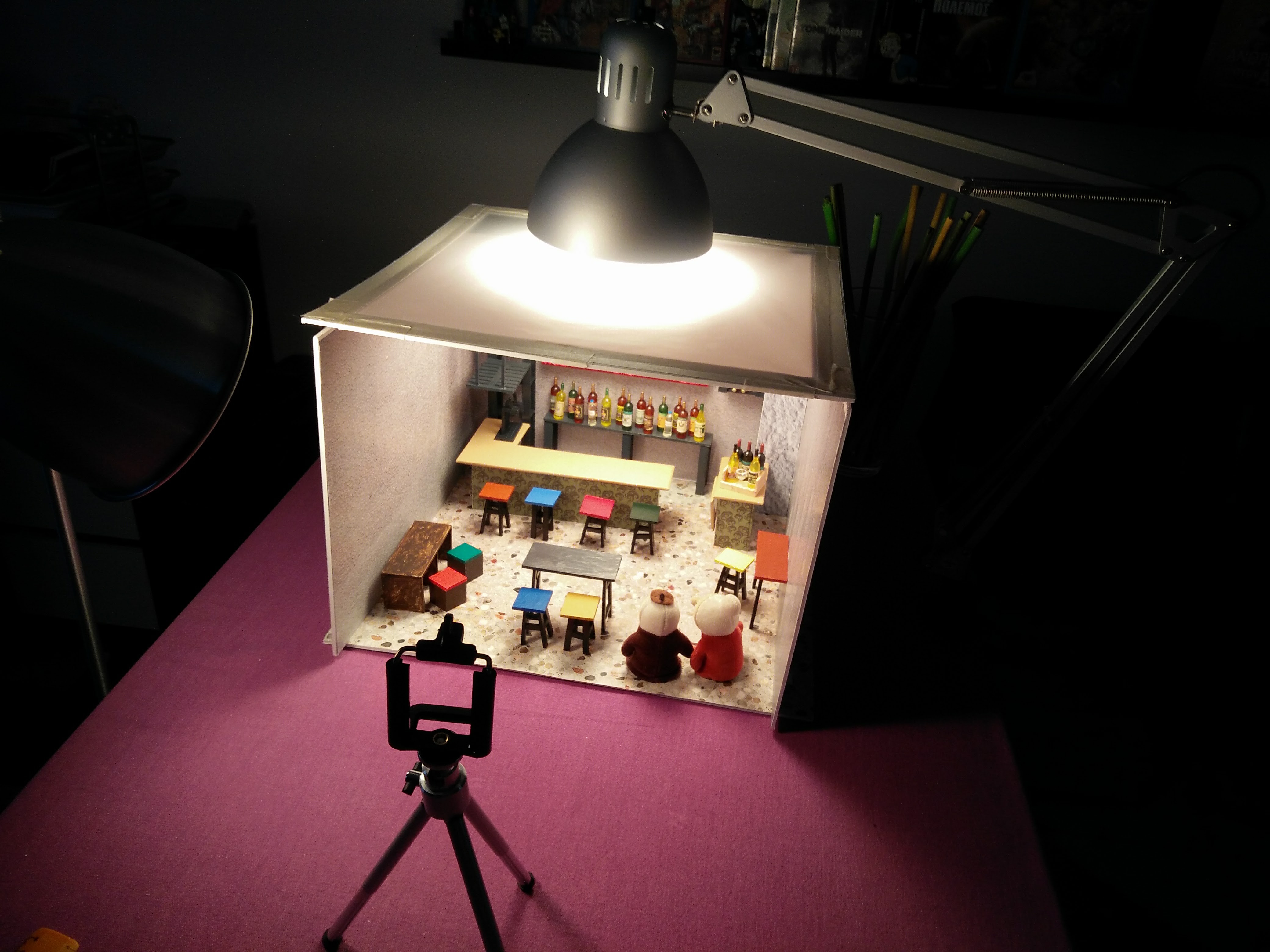 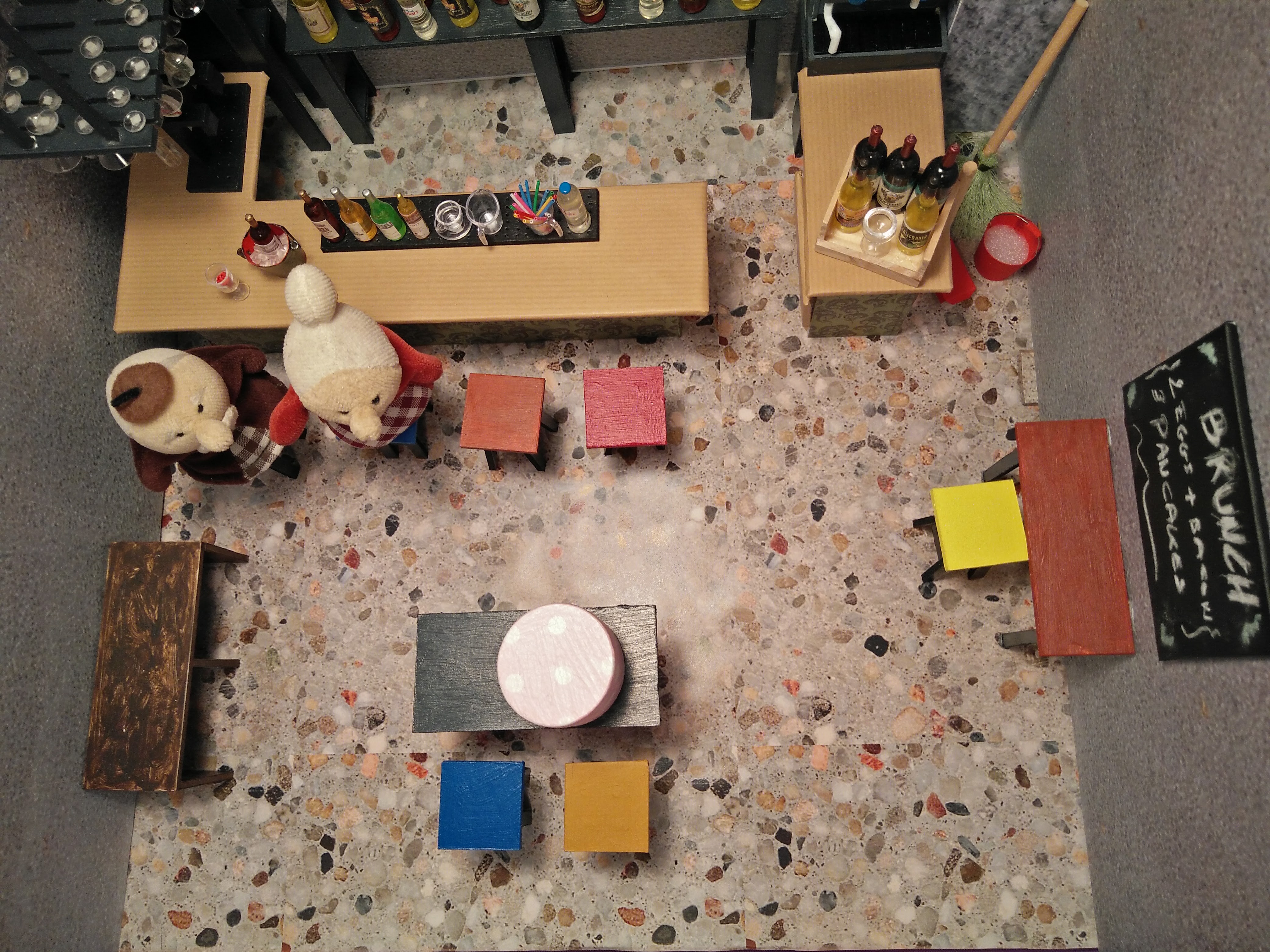 The whole procedure took around 9 months and after ~1500 photos, I had the material to start putting together my first stop motion short film!

Next step was to create a video out of the all the photos that I had gathered. This could be done with various ways but I will document the one that worked for me and keep in mind that I had already been working on this project for 9 months and Im was in the brink of giving up!

The tools that I used in order to join all the photos in one video are the ones below!

First tool that I installed was pyRenamer which is a powerful application with a graphic interface designed for renaming many files at once. Yes I know what you are thinking, why not using awk, sed and other linux commands but keep in mind that at that point, I was already working on this project for more than 8 months and my time window was closing! Second tool was ffmpeg, which is a complete cross-platform solution to record, convert and stream audio and video.

So pyRenamer did exactly what I wanted quickly and easily. The only thing that someone has to do, is choose the folder that keeps all the relevant photos and add the below pattern in the “Renamed file name pattern” field, check the Preview and hit Rename. 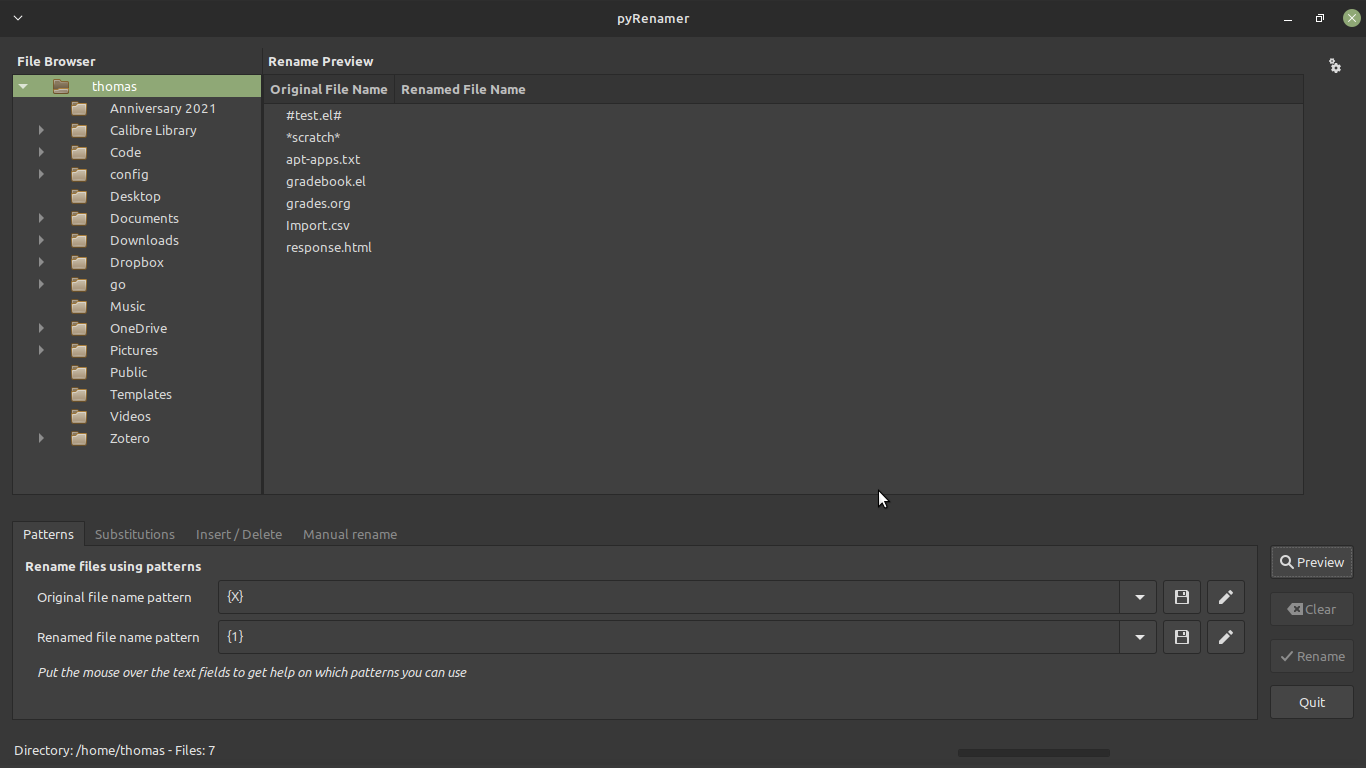 This was needed for the next tool to be able to join the photos in the correct order!

Then ffmpeg comes into play to perform it’s magic! In case you have questions on the options used below, you can find some very useful examples here

As you can see above, there are 3 commands that will create a video out of a bunch of photos.

With the first command we are creating the initial klouvi_stop_motion.mp4 by joining the jpg files. With the second we are slowing down the video speed by changing the presentation timestamp (PTS) of each video frame. And finally with the third command, we are adding our audio.ogg to the finalized version of our short film!

Voila! My first and most important stop motion short film was ready!

This was a journey that lasted almost a year, had its ups and downs but the end result was very fulfilling as I got the chance to combine my creativity and my engineering skills in order to create a marriage proposal that was quite unique and totally me!

Probably there were better ways to do the photoshoots and the editing than with a single One Plus X mobile (that I was using at the time), a basic camera stand and some ffmpeg commands but it totally worth the struggle!

PS: Let’s see what the future brings.. but for now I guess you are wondering whether my girlfriend said yes or no, so no need to keep you waiting any longer! Enjoy!